this is one of the greatest cities on earth.  but I can't even call it a city.  its an experience.  its a feeling.  its beyond awesome.  its what you want when you think of irish culture.  geez, louise.

we discovered a little pub called "tig coili".  and by pub, I mean, a real pub.  no food.  nothing but bacon bites, right kate?

we met some charming, wonderful, hilarious bartenders.  keith and shane.  shane was a smartass.  keith was a wooer.  they were a great team.  it was particularly cute when katie and I would sit down at the bar and shane would point to katie and say "guinness?" and then he'd point to me and say "water?"  wow, thanks.  no, I'll have a cider.

this picture captures the smooth performance of their bartender work, it was like second nature and they were really studly.  this picture features keith and a blur of shane...please notice keith's luscious biceps.  we're getting married. 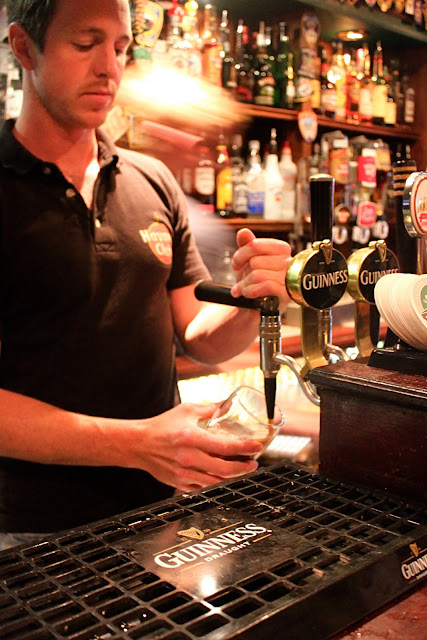 isn't he pretty?  keith and kristi: october 2012, save the date.  too bad you can't see his blue eyes in this picture.