so I know its been awhile.  not only have I been busy and exhausted, but my poor computer ran out of space.  so I've spent the last couple days backing up files so that I could make some room.

so day 81 was a t-m-s extravaganza.  if you don't know what t-m-s is then you're not cool enough for me to tell you.  anyways, I was enjoying time with my friends which meant, duh, mexican food.  it was such a cute little restaurant with lots of little quirky things.  things featured here today in this blog.  it should be noted that shortly after this picture was taken, the power went out.  while we were eating.  quite hilarious, actually.  it was raining and storming like crazy.  we looked like drowned rats.  anyways, here's the picture! 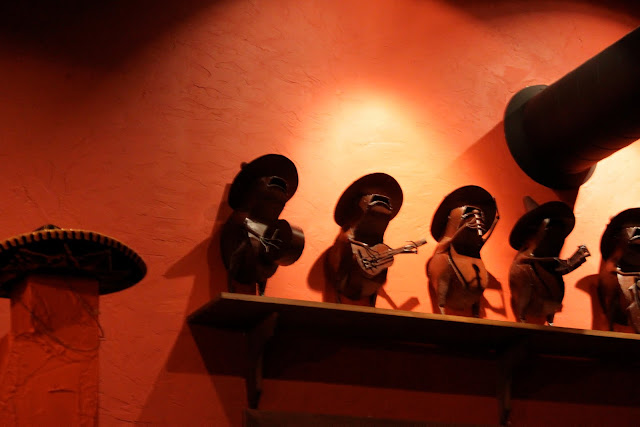 I'm explaining the caption.  when I was little, me and Karen used to watch this disney sing-a-long vhs.  it was amazing and we still have it in the storage room.  anyways, there's a song on there called "three caballeros" and it rocks hard core.  and t-m-s is three caballeros.  there are more than three little nuggets in this picture, so I just changed the "three" to "si".  I think it looks like they're singing, like this is an action shot.